Yes. I really am going to name all of this week’s blog posts in the style of Harry Potter.

After a long, stressful Saturday and a good night’s sleep, Sunday presented itself for a packed day of theatre. First up, Boris: World King, a witty little satire starring Britain’s favourite buffoon, Boris Johnson (well, a man in a blonde wig). A brilliantly funny show is filled with latin, Boris bikes, wiff-waff and tomfoolery. This level of clowning and mimicry takes skill in order for it not to look too staged. My next show was a complete contrast in tone and content: Much Further Out Than You Thought ventures into more emotive territory, as Lance Corporal James Randall tries to tell his 9-year-old son why his time serving in Afghanistan has affected him the way it did – haunting and gripping.

I am always drawn to anything labelled as immersive, partly because as a theatre genre it is so diverse in its execution. Awakening: Sweet and Sour Sensory Composition asks the audience to put on an eyeless mask and to experience the show through their senses. I can’t explain why the two performers were wearing clingfilm, but it did make a rustling sound which helped to establish where they were in the room. As one of the few people who were masked quite late on, I watched as they gently turned the audience into marionettes, made them dance and brought various sensations to their ears, noses and skin. Even once masked, there is that unusual mix of feeling both completely safe and wondering what’s going to happen next. Every individual receives a different experience depending on where they are sat and when they are masked. A fascinating performance.

I have a few friends performing at the fringe this year, so it was a joy to go along and support Sooz Kempner: Character Activist in a room with a modest audience of people who didn’t know her – and to hear them laughing. From Essex princess to Soho Vlogger to mediocre heptathlete to West End diva, this ramshackle bunch are delivered with conviction and a wry smile. And singing. Reknowned for belting her lungs out, this is by far and away where her performance comes into its own. Have you ever wondered what it would sound like if Christina Aguilera sang Silent Night? (Well now that I’ve put the thought into your head…) Pop along to the Mash House and let Sooz show you.

From song to circus, in the capable (and calloused) hands of Circa’s Close Up a stripped back show where nothing is hidden – they do of course have the physical ability to do all these tricks, but there is the mental challenge: when performing, they often have to smile brightly through the fear that this may go wrong. Nothing is made to look easier than it actually is.

With my days jam packed, I have left my evenings free for a bit of spontaneity – in this case a bit of music-based comedy The Shuffle Show, where a couple of Aussies take us into the Pandora’s Box of the iTunes shuffle, picking a theme and seamlessly segueing from one guilty pleasure hit into the next. It’s fast paced and funny, culminating in a dance routine featuring every bit of iconic pop choreography.

I ended the night as the court stenographer for This Is Your Trial, an improv show where members of the audience go on trial, prosecuted and defended by some top fringe comedians. Tonight, Marcus Brigstocke and Howard Read, with the right honorable Jessica Fostekew keeping order. My friend Andy managed to accuse himself of a crime he didn’t commit by putting his name on the wrong line. Other violations of the law included alleged piano theft and questionable jazz ownership, wedding ring loss and tickling to death, and it was my job to tweet the proceedings – including the drawings from the court artist. An anarchic joy and I may have to go back for seconds. 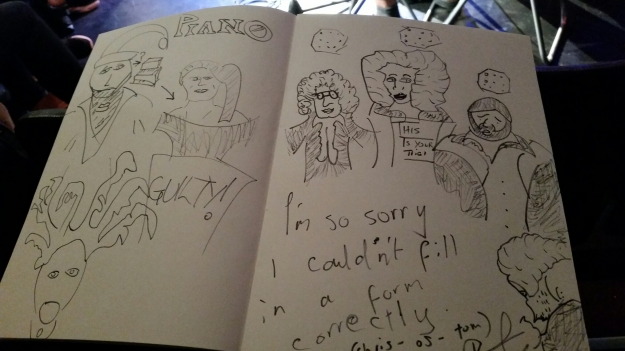 1 thought on “Edinburgh Fringe – Gail Bishop and the Clingfilmed Puppeteers”