Standing on a metal gantry waiting to enter, everyone is handed a small piece of paper:

“Inside the gates of a film studio, Wendy and Marshall struggle to make ends meet.  When Marshall meets Dolores, they strike up an affair.  Wendy confronts Marshall about the infidelity, but he denies everything.  As Wendy’s paranoia becomes uncontrollable, she goes to a party and witnesses the affair first hand.  Wendy’s state of panic accelerates until she leads Marshall into the wilderness and murders him.” 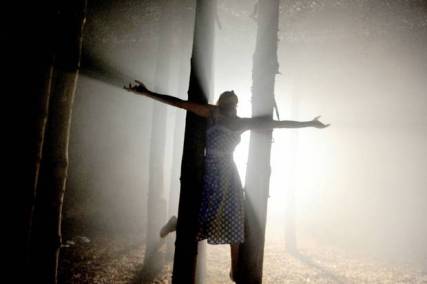 On the other side is an inverse storyline with the genders switched, set outside the gates of the studio featuring William, Mary and Dwayne in the corresponding roles to their initials.  This is a nod to Büchner’s tragedy Woyzeck, but these are the only clues we are given to the story.

Forget everything you think you know about theatre or performance.  Immersive theatre gives you the rare opportunity to wander around fantasy world and discover the characters who inhabit it, to follow them through their story and their interactions, all providing extra peripheral details to the main storyline.  But with no map and no one telling you where to go, what to watch or how long to stay, it is entirely up to you to find them in this great sprawling 4-storey building and decide for yourself who the main characters are.   It’s a bit like Alice falling down the rabbit hole with added ‘press the red button now’ features.

We are sent down a very dark corridor into a small room and handed a mask each and asked to wear it for the duration of the performance – it seems an odd request at first but as we discover, with around 600 marauding audience members and only 32 actors, it really helps to distinguish between the two (so as to prevent audience following audience).   We are then ushered into a service lift and plunged into the dimly-lit world of Temple Studios in 1950s Hollywood and the trailer park that surrounds it.

The first things that hit you are the sheer scale of the place and the level of intricate detail in everything you can see – right down to the strands of hair in the hairbrush on the dressing table in one of the houses; it’s as though this whole world has been there for decades.  It doesn’t take long to find the performers – wandering into a hair salon/cafe on the main street, there are 2 men fighting over a girl – there’s not much in the way of speech, just contemporary dance (people are often put off by this, worried that they won’t understand it, but fear not – their facial expressions, body language and movement will tell you everything you need to know – and it’s pretty obvious from the off that one man is very angry with the other about fooling around with his girlfriend).

I spent a fair bit of time wandering around the various rooms, just seeing what was there and it took me a while to get my bearings.  It slowly becomes apparent that the actors all have their own things to do and places to be, and they will go about their business whether they have an audience or not – they will not wait for you to show up or repeat anything.  This is a great example of the modern phenomena of FOMO (Fear Of Missing Out), always thinking that something more interesting or important may be going on somewhere else – so do you stick with the character(s) you’ve found or do you wander off elsewhere?  What is that noise coming from down the corridor?  Where are they going in such a hurry?  Why are so many audience following them?  Where does that lead?  It probably took me a good hour to feel comfortable with choosing a character, following them, watching their next encounter and then either choosing to stick with them or follow someone else and having the courage to accept my own decisions rather than worrying about what else I might be missing.

But be warned; if you plan to follow a character to wherever they’re going next, stick to them like glue.  Don’t stop to look in other rooms or look back, because in the sea of masked audience, you will almost certainly lose them (if you’re lucky, you’ll find them again later – probably soaking wet or covered in mud/blood or in a totally different costume).  Equally, once you’ve  found a storyline (either inside the studio or out in the trailer park), stick with that too.  Wandering off into the other world will only introduce you to a bunch of unrelated characters – I must’ve lost a good 15 minutes just finding out what was up on the top floor and then unable to find my way back to the staircase – time I wish I’d spent following the characters I was just starting to get to grips with.

It has taken me about 2 days to get my head around everything I’ve seen (and didn’t see).  Speaking to friends who’ve been, it’s almost impossible to compare notes as the chances of you having been in the same room at the equivilent time to them, watching the same scene are virtually nil (“Did you see this bit?”, “No… did you see the bit where….?”, “Nope.  We’re you in the room when they…?”, “Errrr…no.”) although 3 of us have managed to see the same dance sequence in the studio ballroom.  I can’t help but think that this is a ploy to get me to go back and see it again.  I’m already looking at tickets for November.

PLEASE NOTE: This is a promenade (walking) production – comfortable footwear recommended.  Running time will be up to 3 hours depending on your journey.  You will be masked for the duration of the performance (masks may only be removed in the bar area and at the end of the performance); contact lenses would be preferable over glasses.  Age restriction 16+ years.  All 16 and 17 year olds must be accompanied by an adult.  May contain nudity.

I am a long term fan of Shakespeare’s Globe.  I bought a brick for £5 when it was being built in 1996, and having now seen 8 excellent productions on its stage, I’d say it was a great investment.  If your back, legs and feet can handle it, standing in the yard with the groundlings is the best ‘seat’ in the house – you get a great view of the stage and can always move if someone tall stands in front of you.  At just £5.00, it’s also the cheapest theatre ticket in London. 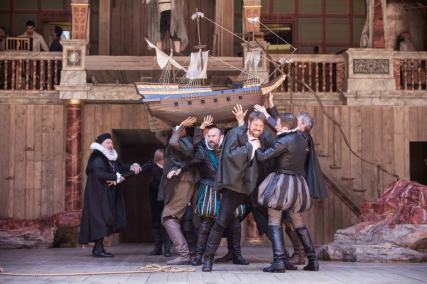 Prospero, the usurped Duke of Milan was banished by his brother Antonio and 12 years later, he still wants revenge.  When Antonio’s ship sails near the island, Prospero uses his magic to conjure a tempestuous storm.  The play opens with its iconic shipwreck scene, with all sound effects provided by the percussionists in the gallery – the matinee sunshine is a little at odds with the sounds of rolling thunder and howling wind, but the men onboard the ship become separated in the storm and each in turn wash up on the island.  There we meet Prospero (Roger Allam), his daughter Miranda (Jessie Buckley), his spirit companion Ariel (Colin Morgan – Merlin in the BBC TV series of the same name) and his deformed feral servant Caliban (James Garnon).

Roger Allam gives a great performance as a man whose bitterness has been reignited by the reappearance of his brother and he proceeds to play tricks on the shipwrecked men, aided by Ariel.  Colin Morgan imbues his character with an almost childlike mischievousness and proves himself more that worthy in a stage role.  Jessie Buckley gives Miranda a glow of naivety, almost drunk with joy when she first encounters the strangers arriving on the island.  But it is James Garnon whose wronged simian-like Caliban steals the show at times with his vocal gymnastics, swinging from deeply guttural to high pitched squeaking.

The highlight of the play is a typical Shakespeare slapstick scene; drunken jester Trinculo (Trevor Fox – last seen in The Pitmen Painters) stumbles ashore, wrings out his oversized codpiece and hides under a blanket waiting for the storm to pass, only to find Caliban underneath and the two proceed to get tangled up in the fabric.  The writhing, shouting mass of limbs is found by Stephano (Sam Fox, a regular face in Shakespeare comedy roles) a drunken steward from the shipwreck who believes it to be creature that is either ill or possessed: “four legs and two voices: a most delicate monster!”  Shakespearean comic acting at its best.

The Tempest runs on selected nights up until Sunday 18th August, however it forms part of the ‘Season of Plenty’ at the Globe which includes A Midsummer Night’s Dream and Macbeth which are running until Sunday 13th October.

Shakespeare’s Globe is currently building a traditional indoor Jacobean theatre which will be open for its first performances in January 2014.  To be named the Sam Wanamaker Playhouse, after the Globe’s visionary founder, this will be an exquisite candlelit venue in which Shakespeare would have felt right at home.  They have so far raised 94% of their £7.5million target.  If you would like to contribute towards this exciting new venture, you can do so by clicking this link.